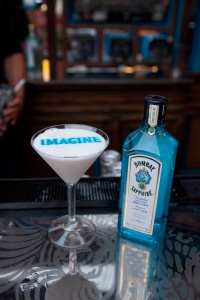 What better way to spend a Friday night than surrounded by craft workshops, original and exciting new designs and a few specially designed gin-based cocktails.

This is exactly the concoction created for the latest Friday late night at the V&A, based around the recently launched Power of Making exhibition.

Crafting has become an overnight sensation and more people than ever are donning a needle and thread and knocking out anything from bunting to a floor length dress. The V&A has trumped on this trend creating a lovely collection of hand crafted curiosities from the puppets from 2009 film Fantastic Mr Fox and a six-necked guitar to a working wooden bike, a lion-shaped Ghanaian coffin and a spun metal rotating chair.

The exhibition isn’t huge but it’s well worth a visit – even if you’re not into craft you’ll be impressed by some of these creations, such as the giant gorilla made from coat hangers.

To match the eclectic nature of these crafts – Bombay Sapphire made some perfectly suited cocktails to enjoy. For gin lovers this bar is a little piece of heaven offering twists on classic drinks. The most impressive visually was the Imagination cocktail – served in a giant martini glass with the words “Imagine” magically formed on top in a bright blue sherbet. The light cocktail is made with lemon juice, Maraschino liqueur, Crème de Violette, gin (obviously) and egg white and the flavours balanced each other perfectly creating a mythical-looking summer cocktail.

The Imagination Bar was located in the V&A courtyard – an excellent choice for such an unseasonably hot night – and the bar was busy all night with thirsty crafters. This was a great end to the V&A’s series of summer camps and we hope they will return (along with the nice weather) next year.

If you want to laugh a lot, Tim Minchin is a pretty safe bet. The hugely successful Australian comedian received a warm reception last night at the opening of the London’s Greenwich Comedy Festival.

Playing a mix of old favourites and a few new songs, Minchin had the audience singing and laughing along between a mix of comic and tender pieces.

He successfully caused the tent to shake with laughter – and despite a few technical blips with the wiring in the venue – Minchin and the other acts complimented each other leading to a hilarious evening. Standout tunes included his anti-lullaby to his sleepless baby whereby he expresses hope of a hungry Dingo to take the screaming child away from him and “Context” – played twice, first as “Cont” with each line offending a different member of the population and the second time leaving members of the audience crying with laughter with a middle-class awkwardness at having laughed at abusiveness of the first verse. And obviously not forgetting his classic “Prejudice” about people who bully gingers which most of the crowd sang along to.

His makeshift appearance of bare feet, a mass of red hair and blackened eyes might not be what you would expect from an exceptionally talented musician. But despite his ability to make you cringe and laugh almost in the same sentence – Minchin is a truly fantastic musician.

The warm up was a treat to the ears as well. Starting with triple Perrier Award nominee Dan Antopolski who possibly received the loudest laughs of the night, second to Minchin. He was followed by the equally entertaining Edinburgh Comedy Award winner Tim Key and Mock The Weeker Holly Walsh.

In its third year, this fantastic festival has presented massive acts such as Russell Howard, Bill Bailey, Jo Brand and Reginald D Hunter.

Last night Minchin topped a richly entertaining evening of comedy and music which the rest of the week’s line up will be hard pushed to follow.

Swing Down To Circus London In Covent Garden 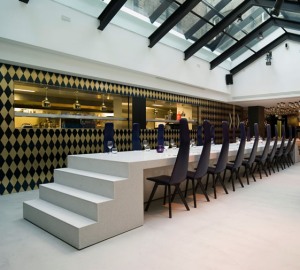 We urge you to swing (literally) down to Circus London in Covent Garden where an array of performers are on hand to entertain you on any evening of the week.

As you approach this west end cocktail bar it’s easy to miss the entrance, formed of two large steel black doors and a lack of any obvious direction. Once you manage to get in the entrance hall is cloaked in darkened lights and mirrored walls, which add to the bar’s magical charm. The venue is lit with candles, glitter balls and mirrors (less tacky than it sounds) with a large granite table taking centre stage.

If you’re sitting here be warned – this is not a spot for the faint hearted as the artists will swing over and around you, within centimetres of your cocktails, and may even take a swig if you leave your drink in their way. The performers change all the time so you’re unlikely to see the same thing twice – a clever way of keeping Circus shrouded in secrecy. But you’re unlikely to be disappointed, just in one evening I saw everything from gymnasts who make their bodies contort in unnatural directions, fire-eaters with no pain nerves left to glamorous burlesque dancers and traipses artists.

Between courses the lights will go down and shutters block out the kitchens while the performers appear and make standing on one arm while balancing their body weight seem to be quite an easy task.

Located in Endell Street, it’s less exclusive now than when it first opened but don’t be surprised to see a celebrity or two here and prepare to pay for the night with prices starting around £70 each. The bar is by no means just about the performers either and offers a delicious selection of Pan Asian food to tuck into while watching the artists balancing on their heads or eating fire sticks. As you’re meal is split up between acts, platters or sharing plates are ideal and there’s a wide range to choose from, including Thai green curry, tuna sashimi and fresh noodle wraps. The cocktail menu is also in a level of its own with fresh concoctions and twists on the usual favourites to try out (starting at around £9).

I enjoyed the hibiscus margarita not really knowing what to expect and was impressed by the fruity blend while a friend ordered the mixed berry julep served in a golden cup similar to those used by a Roman emperors. Circus has managed to create something a little different from your normal restaurant or bar while successfully avoided the novelty cliché. It’s the ideal place if you’re looking for an alternative night combined with great cocktails and food. Despite the theatrics the bar remains a trendy spot for cocktails and because of its popularity table bookings are a must.

David Nicholls Talks About One Day

It’s been described as the love story of the century and the iconic orange cover is instantly recognisable as One Day – the best selling novel by David Nicholls.

This week he spoke to John Mullan in the Guardian book club series about how he came up with the idea for the 20-year romance and was extremely humble throughout. In fact the author spent a lot of the hour talking about ways he could have improved the book if he could go back and write it again.

The story if you haven’t read it (do you even exist?) follows two students who meet at university in Edinburgh and spend just one night together before graduation.  This day is St Swithin’s Day in 1988 and the novel follows the couple through the various twists and turns over the next 20 years of their life – always going back to the same date.

Emma and Dexter have little in common. She is your typical “normal” working class girl from Leeds and Dexter is the polar opposite – a posh, pretentious and arrogant boy from the Cotswolds.

One Day follows the story of how these two people cross paths over 20 years and shows how friendship and love make us better people.

Nicholls said the novel was planned in immaculate detail and although he always knew what would happen  – there were a few details left out which he shared. For example, Dexter was originally going to walk into a job as a journalist with GQ after graduation but Nicholls decided he probably wasn’t clever enough for this (no offence TV presenters) and our heroine Emma, was very nearly called Maeve.

Another change was the title – St Swithin’s Day in the planning stages to the catchier One Day.

It’s not a traditional romantic comedy and although there are many funny moments – the overtone of the book is a touching love story. Real life is captured effortlessly allowing the reader to see their self and friends through the characters.

Within the pages there are many direct speeches lifted out of Nicholls’ life. One especially touching moment is when Dexter tells Emma the one gift he wishes he could give her is the gift of confidence. This is something a friend once told Nicholls during the mid 1990s when he was stuck trying to break into acting.

The recent movie version was touched on briefly but Nicholls jumped to Anne Hathaway’s defence and pointed out that adaptation means change and any film will never match a reader’s imagination.

First published in 2009, One Day has seen extraordinary success. If you haven’t read it already you should make it a priority – just try and avoid anyone giving away the ending.