Too Fat? Too thin – who cares?

Copenhagen is the subject that should be on everyone’s minds. The world is dying – global warming is the single biggest issue to affect us and still world leaders can’t commit to doing anything about it. Instead of getting up and demanding action – most people don’t seem that bothered.

Most papers and magazines make mention of the issues but nearly every magazine, and most tabloid papers, instead are filled with pictures of celebrities. Beyoncé has cellulite, Jennifer Anniston is too thin, Keira Knightly needs a burger – this kind of drivel is everywhere and these publications are flying off the shelves. 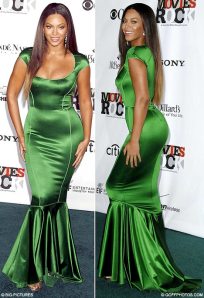 Our nation appears obsessed with weight and tabloids hound celebrities to lose weight or gain pounds on a day-to-day basis. 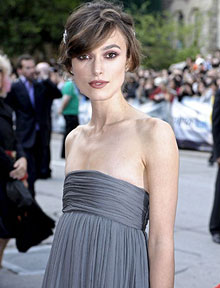 It’s nearly Christmas time and the mounds of mince pies, Yule logs and all things festive, sweet and bad for you are piling up. In the lead up to Christmas there is a never-ending supply of sugar filled goods around in most offices.

As it’s only once a year everyone forgets their strict dietary regimes and puts off the scales until the New Year resolutions set in, and why not – we might as well enjoy the festive season as it does only come around once a year. 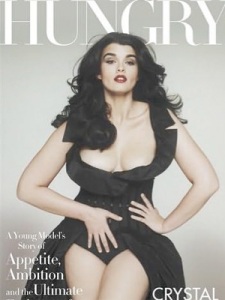 Our obsession with weight has once again riled its inquisitive head and the pro-size debate has emerged with more force than ever in the January ‘Size’ issue of V Magazine. Following pro-size publications in both the US Glamour and the German Brigitte another magazine is following suit.

Crystal Renn, a plus-size top model, and other slightly curvier than your average models will be appearing in the January issue, which is aimed at all shapes and sizes. 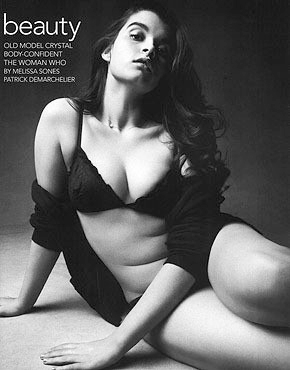 In a month when most of us are desperately trying to lose extra Christmas pounds, it will be a refreshing change to see real women in the magazine instead of the impossibly thin waifs that usually fill the pages of most mainstream mags.

And guess who will be photographing these normal sized women – famous photographers including Inez van Lamsweerde & Vinoodh Matadin, Terry Richardson, Bruce Weber and you guessed it Karl “no one wants to see curvy women” Lagerfeld. It seems the fashion don has joined the bandwagon and no longer thinks curvy women should stay out of the catwalk – a Christmas miracle? or an excellent publicity stunt?

V Magazine’s editor-in-chief , Stephen Gan, said: “Big, little, pint-size, plus-size – every body is beautiful. And this issue is out to prove it.”

The fashion industry and its critics are forever obsessing over the weight of celebrities and models alike, and by creating this special issue the magazine is highlighting the fact that these women are different from the average model.

Fashion and celebrity blog Jezebel said:  “The flip side of highlighting one kind of model in a ‘special’ issue is that they’re actually being segregated, placed in a ghetto, away from the other ‘real’ models.”

However much this is true I still think it’s a good move towards making the fashion industry more acceptable and allows much of the female population to feel a bit better when glancing through the latest edition of their favourite fashion magazine.

Glamour‘s and Brigitte‘s plans do seem to be more long-term than V’s one off edition. Brigitte is to replace size zero models with normal women  from next year, and Glamour has stated  it would be “committing to picturing a wide range of body types in our pages.”

The plus size models in V’s January edition are an average UK size 12-14 and as the UK average female size is a 16 –  it’s hardly representative of our nation.

But the fashion industry, which stringently clings on to it’s size 0 models, is beginning to change – it is a tiny step but we can hope, while writing our new years resolutions, that in  2011 models will include more normal sized women.

Maybe in the new year we will stop talking about weight and start worrying about the future of the world…however, if this year’s headlines are anything to go by it’s unlikely we  will get bored of this compulsive obsession – the issue will rage on well into 2011.

One response to “Too Fat? Too thin – who cares?”