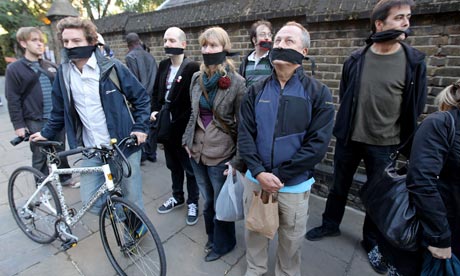 Multi-media corporations to newspaper journalists – beware. No longer can you get away with silencing the press and covering up corrupt or illegal actions. Whether you are a multi-national company, or a Daily Mail columnist – the audience is answering back.

The online world is expanding daily and currently 38% of all online users have a social networking profile and 41% are using networking sites daily. Facebook is the second largest site in the UK after Google with over 300 million users and the relatively recent Twitter now has 18 million users.

Everyone knows the story about Trafigura-gate. Triumphant newspapers and the twittershphere have been boasting (rightly so) about it all week.

In brief –  the super-injunction prevented the Guardian and other media outlets from reporting on the question asked by Paul Farrelly last week, and even from telling the public what it was forbidden to tell them.

On October 13th the Guardian printed a short front page article stating this, causing a frenzied rush of internet users to seek out the forbidden papers and splash them all over twitter.

MPs have reacted with anger to the suggestion a law firm had tried to gag a newspaper from reporting parliament and demanded an emergency debate, being held today.

Injunctions have become one of the most effective tools powerful individuals and corporations can use for silencing the media.

Alan Rusbridger, said: “I’m very pleased that common sense has prevailed and that Carter-Ruck’s clients are now prepared to vary this draconian injunction to allow reporting of parliament. It is time that judges stopped granting ‘super-injunctions’ which are so absolute and wide-ranging that nothing about them can be reported at all.”

The Guardian (and everyone else) is still forbidden by the terms of the existing injunction, granted by a vacation duty judge, Mr Justice Maddison, to give further information about the Minton report, or its contents.

Last month, Trafigura agreed to pay more than £30 million in compensation and legal costs to 30,000 inhabitants of Abidjan in Ivory Coast, for “flu-like symptoms” they might have suffered following the dumping (the importance being on the word “might”.)

The oil traders continue to deny that the waste could have caused serious or fatal injuries.

Surely the question we should be asking is why Trafigura allegedly dumped the waste off the Ivory Coast. If this was some where slightly closer to home, for example: the west coast of Scotland – we would have definitely have heard more about it before now.

This is an example of a multi-national company trying to silence the media reporting on its immoral and inhumane activities.

I wonder how many other multi-national corporations have done similar acts around the world and obtained super-injunctions to silence their activities. Coca-Cola, Nestle, Shell…we all know they’re up to no good but there is never enough public attention on these companies – maybe because their actions are covered up so well.

Super-injunctions are not good – they silence free speech and allow people to hold anything they want back from the media.

This week the bloggersphere proved how effective it is and, combined with the Guardian, forced the super-injunction to be abolished.   A huge success for free speech.